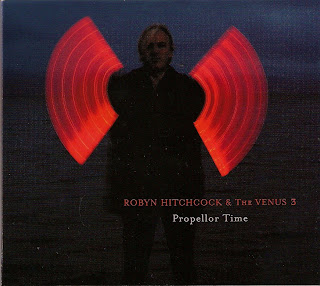 , his third Venus 3 album since 2006 - Venus 3 being the three-piece outfit with which the Hitch has surrounded himself of late.

And jolly fab, if not a tad idiosyncratic they are too.

This ought hardly be surprising, considering they are made up of former Ministry drummer Bill Rieflin, Young Fresh Fellow, Scott McCaughey on bass, and the irrepressible REM guitarist, Peter Buck, on assorted jingle-jangle sparkle. So as Venus 3, said three contribute to Hitchcock’s quasi-existentialist musicality in such a way that it sounds as if they’ve been together for at least thirty-five years.

The mercurial opener ‘Star of Venus,’ being a perfect example of the exquisite understanding conveyed throughout. With a relaxed, cerebral feel that so many of today’s young bucks would clearly fail to muster in a hundred million elongated life-times (with the possible exception of The Arctic Monkeys), the interaction betwixt the four is both wry and wondrous to behold. Replete with Hitchcock’s quirky and eccentric Englishness - which is admittedly not too far removed from Syd Barrett era Pink Floyd - it is immediately apparent that this, along with ‘The Afterlight’ that follows, is not the sort of song you’re ever likely to hear on the Ken Bruce Show.

To a certain degree, this might be considered a good thing - although from a shifting product perspective, perhaps not quite as inspiring to the man in question as that of the dreadful Leona Lewis.

Still, as Tony Soprano likes to say, ‘waddaya gonna do?’
Bequeath the world with turgid repetition or continue to traipse the boards of individuality?

That the kindred and utopian spirit Nick Lowe lends a hand - on what can only be considered the most lush of harmonies on three tracks - is an added bonus; as is the appearance of former Zep multi-instrumentalist, John Paul Jones, on mandolin.

While the latter’s contribution is on a live rendition of ‘Luckiness’ as well as the album’s closing track ‘Evolove,’Propellor Time’s stand-out track has to be ‘Ordinary Millionaire.’ Co-written with former Smiths guitarslinger, Johnny Marr, the song’s introduction arrives by way of Kate St. John’s austere and rather glorious cor anglais, before kicking in with the coolest of chord structures; eventually evolving into one of the most eloquent of (original) songs heard in a long time.

Moreover, it’s the trajectory of Robyn Hitchcock’s mid-period Revolver influence of The Beatles, along with the aforementioned Piper At The Gates of Dawn era Pink Floyd, which continues to align (t)his work with (occasional) brilliance, substance and coherence. Regardless of guest musicians.

For this reason alone, is the former Soft Boy’s work always worth investigated and delving into, even if only to momentarily remind oneself that music still actually counts for something - other than disgusting tax returns and deplorable, vacuous ratings.