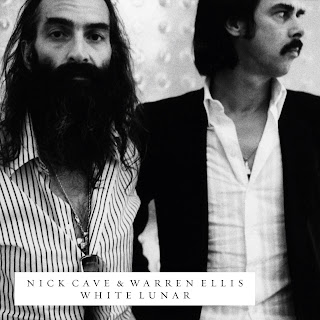 Nick Cave & Warren Ellis
White Lunar
Mute Records
White Lunar is a brave and rather beautiful double album of film-scores, recently released by Nick Cave and his ever reliant, coruscate cohort with The Bad Seeds, The Dirty Three and Grinderman, Warren Ellis. With many of its thirty-three tracks clocking in at around the two and a half minute mark, it’s an album that consists of a veritable travail of musical terrain - both exquisite and intimidating.
Taken from the various motion pictures and documentaries the two musicians have been involved with over the years - namely The Assassination of Jesse James by the Coward Robert Ford (2007), The Proposition (2005) and The Road (as yet un-released) on CD1, with The English Surgeon (2007) and The Girls of Phnom Penh (2009) making up the majority of CD2, White Lunar is indeed a piece of work which transports the listener to an altogether inspiring place. Most notably, a place of correlative and sweeping, musical soundscapes; all sparkling in persuasion, yet semi-sinister in relation to the album’s alluring albeit pristine production (care of Messrs. Cave, Ellis and Gerard McCann).
Of the four Jesse James tracks which open the album, it’s the six minute ‘Song For Bob,’ which truly captivates, and is worthy of a nigh immediate, repeated play. It’s ethereal and almost childlike tenderness, surely substantiates the authors’ collaborative understanding of working and scoring within the film-score genre, whilst two of The Proposition tracks, ‘Road To Banyon’ and ‘The Rider No.2’ are a fleeting reminder of their more familiar, and as such, effervescent/effortless terrain. The latter in particular, with Cave’s twin lead vocal singing both within and without, is distinctly great, especially when halfway through, the song explodes into a high-octane gear of superb and solipsistic noisy-texture(s).
We’re talking controlled chaos at its finest.
Continuing with The Proposition, ‘Martha’s Dream’ is a slight return to some of the earlier tracks - replete with idiosyncratic use of percussion, ‘Gun Thing’ finds the linear, multi-tracked violin of Warren Ellis colliding amid Cave’s promise to ‘’chase our blues away with a gun,’’ while ‘The Rider Song’ is just one of the album’s many highlights. Whether or not this is due to the fact that ‘The Rider Song’ wouldn’t be at all out of place amid a typical Bad Seeds album, or the fact that Cave knows how to utilise his voice sparingly, effectively, yet with climatic timidity, is anyone’s guess.
The bleak and funereal music of The Girls of Phnom Penh opens the second CD, and with the possible exception of ‘Rom’ - which drips with a musical innocence amid the flowering youth of intransigent bloom - all five pieces resonate with a kloof like (yet appropriate, unfortunate) sinisterness. Shortly thereafter, one stumbles upon the six tracks of erudite eloquence, which accompany the harrowing film that is The English Surgeon - wherein a certain Dr. Henry Marsh struggled to introduce neurosurgery to the Ukraine.
It’s been suggested that White Lunar isn’t a particularly unified album; that it’s nothing more than a mere collection of Cave and Ellis’s film-scores, along with a handful of individual tracks. And is as such, more of a compilation sampler, which primarily exists to direct listeners to other works.
Be this as it may (which I don’t believe it is), so what? Countless artists have made entire careers out of directing listeners elsewhere. Status Quo have been doing so for the last thirty or so years, while Lily Allen looks set to do the same for perhaps the next thirty.
Either way, White Lunar

remains an album of sheer audacity, wit, intelligence, truth and soul; qualities both the aforementioned artists - along with countless others - sorely lack.
David Marx
www.davidmarx.co.uk
www.myspace.com/davidmarx