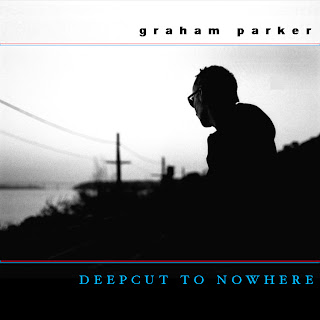 Graham Parker
Deepcut To Nowhere
Razor & Tie
Armed with more wit and wisdom than several hundred cacophonous platoons of X Factor shonk shites combined, Graham Parker is still the veritable dog's under-carriage when it comes to implicit songwriting of a icosahedronic persuasion. John Lennon he's not – but then who is? A writer of countless great songs - all regal'n'caustic'n'tempestuous'n'derelict of superfluous, saccherine hyperbole – though, he most defintely is.
Ever since Parker came to prominence with such profound pearls as 'Hey Lord, Don't Ask Me Questions' and 'You Can't Be Too Strong,' he has remained an inexorable and integral mainstay of songwriting validity. His work is akin to that of Ronseal, in that it does exactly what it says on the tin: strong songs, intelligent lyrics, hummable melodies, thought provoking morality; and after thirty-five years of it always having been thus, there's still no sign of his material dissolving into that of a Status Quo quagmire.
In fact Deepcut To Nowhere is about as far removed from the likes of Status Quo as Englebert Humperdink is from a prison sentence. On 'Socks'N'Sandals,' Parker states: ''My best friend's a hillbilly/With a moonshine still/Actually I'm lyin'/He's an accountant named Bill,'' wherein the listener is invariably reminded of the writer's penchant for humour amid circumstancial awkwardness. Akin to several songs on Bruce Springsteen's last album Working On A Dream, Parker makes no bones about his advancing years. If nothing else, he makes a mockery out of (his own) inadvertent shortcomings throughout the chorus, by openly declaring - if not deriding - middle-aged inevitability: ''Socks'n'Sandals/As I hold on to your love handles.'' That there's an introduction of handclaps on the song's outro, which further substantiates what many would consider as flippancy.
Moreover, Graham Parker albums are more often than not, riddled with a plethora of juxtapositional get out clauses - one of which in this instance is called 'Syphilis & Religion.' Brave and brilliant and burning with rage, lest it be said: we need more fucking songs like this in the world. For all the young gunslingers, currently strutting their drainpipes'n'sticky-up-hair, there's no-one - with the exception of The Arctic Monkeys - who's truly telling it as it ought to be told. And if there's one thing yer man has always been astonishingly good at, it's telling it as it most definitely needs to be told: ''Syphilis & Religion/Two things you could/Probably do without.''
There's also more than just a sense of social purpose betwixt the grooves of Parker albums, Deepcut to Nowhere

being no exception. Of the album's twelve tracks, I'm hard pressed to think of any filler. Simply because there isn't any. From the strident opener of 'Dark Days' to the shimmering reliability of 'If It Ever Stops Rainin,'' right through to the rather exceptional and penultimate track, 'High Horse,' this album is about as good as it gets.
Reason being, Graham Parker still has something to say.
On 'High Horse' for instance, he berates global belligerance by pointing out that there is nothing more potentially odious as that which the title proclaims. A trait, which if you think about it, remains wholeheartedly promoted by today's equally odious/vicious celebratory culture - from which a menagerie of celebratory high horses do indeed leap forth (most of whom are so despicable, I'm loath to even mention their names).
A fab'n'worthwhile album, which needs to be bought and heard - even if only for 'Syphilis & Religion' alone.
David Marx
www.davidmarx.co.uk
www.myspace.com/davidmarx