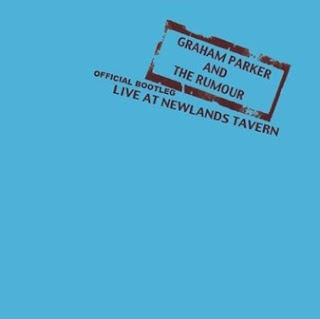 Dripping with more vibe than a Stevie Wonder convention at Specsavers, this twelve-track album, although lacking in sound quality, is a tempestuous testament to all that was truly great about early Graham Parker and The Rumour. It packs a major punch to the sternum of music industry servitude, by merely being that which used to make rock’r’roll so fucking exciting.

Dating back to 1975, this official bootleg was recorded during a time when Abba were riding high in the charts and the likes of Deep Purple were surfing knee deep in bloated bickering. So with Bennie Andersson and Ritchie Blackmore in mind, it should comes as absolutely no surprise that Nigel Grainge eventually signed Parker and The Rumour to Phonogram. The former of whom went on to sign Sinead O’Connor at Ensign, the latter of whom went on to write some of the finest crafted songs of the decade - of which ‘Between You And Me’ and ‘Don’t Ask Me Questions’ are fine examples (both of which are included in this live performance).


Live At Newlands Tavern is a sweat drenched, club recording of a band that instinctively know they’re going places. From the opening gambit of The Jackson Five sounding ‘Chain Of Fools,’ right through to the closing crowd pleaser ‘Soul Shoes,’ there’s an underlying confidence that bestrides all proceedings. Even Parker himself, comes across as a chatty, right-on sorta geezer down the pub, while the ever purposeful Rumour execute the songs with all the chutzpah and swing of a band about to reach the top of their game.


That said, one cannot help but wonder if Graham Parker was flicking though a sunglasses catalogue during track seven, because as an Instrumental it has something of a sheen like, Shadows persuasion!


In other words, it’s far too clean and too ballroom dancing for its own good.


However, this is more than made up for by the time we reach the Springsteen sounding ‘Gypsy Blood’ and ‘Not If It Pleases Me.’ Another two songs which testify to the fact that even at this early stage, Graham Parker was a formidable songwriter - who was really lucky to have stumbled upon a fantastic backing band in The Rumour (who were themselves, not that far removed from that of The E Street Band).

Labels: Graham Parker and The Rumour - Live at Newlands Tavern