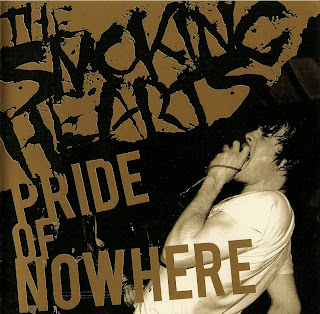 The Smoking Hearts
Pride Of Nowhere
Cargo Records
At three minutes and eight seconds, ‘Thundersludge’ is the longest of the thirteen tracks on this debut album by The Smoking Hearts - most of which clock in at around the two and a half minute mark. A feat, which in this day and ultra beige age of the pregnant pop persuasion, is mighty exhilarating to say the least.

As David Byrne once said: ‘’say something once/why say it again?’’


A dogmatic dogma, to which this lot wholeheartedly subscribe. That they probably do so inadvertently, accounts for much of Pride Of Nowhere

being an even groovier album than many will initially purport it to being.


All tattoos and sneers and voluptuous in-yer-face frenzy, The Smoking Hearts are the musically misconceived, bastard child of Gallows - but with a twist: namely that of flesh’n’blood. For where Watford’s finest work within the well defined, yet somewhat confined parameters of latter day/latent punk, The Smoking Hearts are swathed in a footloose yet tempestuous trajectory of full-throttle fuck you - regardless of The Sex Pistols. Although one does wonder if lead singer Lethal was subliminally so-called as a result of Sid Vicious!


Either way, the band are reminiscent of America’s Social Distortion and that great Brummie band of the seventies, Black Sabbath – whose lead singer was also fundamentally known by the one name and who too, sang in a meandering mutant version of the blues.

The album’s title is a one-minute instrumental, wherein the residue of expectation is immediately trounced by way of ’Daddy’s Little Disaster.’ A smash’n’grab little number of perdurable perdition; it is as fast as it is frenetic as it is furious as is the rest of the album. In other words, what we have here is not a collection of songs for those suffering with any form of epilepsy, as the strobe like delivery of Messrs. Nobra (guitar), Barker (guitar), Matty (drums), Calvin (bass) and Lethal, is the complete anti-thesis of all things Shite-Factor and Justin Timbersnake. Which is as it ABSOLUTELY SHOULD BE.


The stomptastic ‘’George Street Wrestling’’ is track five, and already, one is wondering if Lethal is going to die before reaching the end of track eleven…


Upon reflection however, it is (t)his rasp-like, shoutaholic approach, which constitutes for much of the band’s all-conclusive viper-like-vibe-and-velocity. This, along with the inclusion of wah guitar on a number of tracks (including the album’s strongest ‘Thundersludge’) and a drummer clearly on heat. That there’s a tiny bit of cymbal spillage right at the end of ‘Daddy’s Little Disaster’ for instance, only reinforces the aforementioned tonality of flesh’n’blood.


My one bone of contention being the odious and harrowingly entitled ‘Stab Twist Kill.’ What with the upsurge of utterly unnecessary, heartbreaking knife crime throughout the UK in recent years; does such a seemingly intelligent outfit as The Smoking Hearts, really need to resort to such lyrical prostitution?

is an album of exquisite potential. The sort of which, will hopefully make the likes of such ghastly artists as Guns’n’Roses realise what sort of band they could have been - before turning into margarine (or was that John Lydon?).