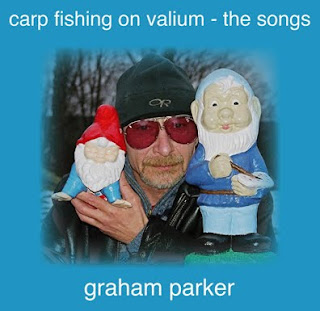 Graham Parker
Carp Fishing On Valium – The Songs
UpYours Records
Towards the end of the linear notes of Carp Fishing OnValium, Graham Parker writes: ‘’It has all the prerequisites of the raw demo scenario with strong vocal and guitar work, plenty of open tuning, songs that sparked off entire albums like ‘’Blue Horizon’’ and ‘’Anything For A Laugh,’’ a tune called ‘’Hot Ringlets’’ which I never even sang on the tour but ripped off later for ‘’Go Little Jimmy,’’ and of course six tunes never heard again until now.’’
This being all well and good, ought some form of quality control not to have prevailed somewhere along the line? For while these eleven, relatively naked, acoustic songs may be ‘’prerequisites of the raw demo,’’ their execution is far more akin to that of skeletal reference rather than stripped-down performance. And while it’s clearly evident that Parker is having a good time throughout - he sardonically introduces each song with just a hint of angular inferred causality – the journey betwixt track one (‘Coins In My Pocket’) and track eleven (‘Carp Fishing On Valium’) is nevertheless, an arduous one. And I’m a Graham Parker fan!
So who is Carp Fishing On Valium

actually aimed at?
Admittedly, it doesn’t necessarily have to be aimed at anyone. It’s still an album with a couple of terrific songs, which, to these ears at least, just warrant some tender loving production.
Songs such as the delicate ‘Blue Horizon’ and the Dylanesque ‘Last Stop Is Nowhere’ - both of which surfaced on the Deepcut To Nowhere album - are, if nothing else, overtly honest lyrically. The latter in particular, wherein Parker sings; ‘’I know we’re leavin’/On different trains/With the same baggage/But different aims/You’re headin’ eastbound/I’m headin’ west/You keep sayin’/That it’s for the best.’’
Bewitching and beguiling songs both, which explains why they made the grade by being included on the aforementioned album; but these renditions are so vulnerable, said songs are almost stifling.
As such, they cease to communicate, which is an awful shame because Graham Parker deserves so much more (recognition).
David Marx
http://www.davidmarx.co.uk/
www.myspace.com/davidmarx