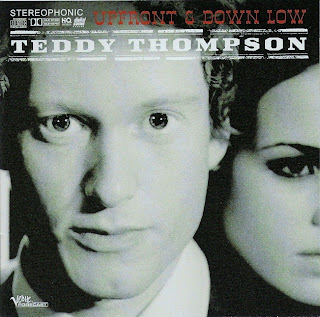 Teddy Thompson
Upfront & Down Low
Verve Forecast/Universal
So Teddy Thompson goes country. Hardly surprising really, especially considering his voice and all round musical demeanour are as equally at home in the country arena, as they are in his usual terrain of sensitive song sensibility. These twelve tracks (thirteen if you include the one not listed on the sleeve), verify Thompson’s penchant for fine story telling, even if they have been written by an assortment of other artists.
With the exception of the self-penned, broodingly fantastic ‘Down Low’ (which, at just under six minutes, may be just a tad too long), all the songs on Upfront & Down Low are covers. In fact, the album as a whole comes across as a work of love and sparkling appreciation, especially given the line-up of top-notch musicians involved. For not only does Teddy’s father, Richard Thompson contribute some gossamer guitar (on three tracks), the album also includes occasional Tom Waits guitarist Marc Ribot, as well as fab singer-songstress Iris DeMent – whose ostensibly unique contribution to ‘My Heart Echoes,’ unsurprisingly ensures it as one of the album’s stand out tracks.
As such, the self-produced Upfront & Down Low is an altogether exquisite recording, which comes replete with a few hidden gems.
Both the opening track ‘Change of Heart’ and ‘The Worst Is Yet To Come’ exemplify Thompson’s aforementioned appreciation for the country genre, thus making them somewhat reminiscent of another interpretation of country songs – that of Elvis Costello’s Almost Blue. But where Costello’s offering was wrought with high-wire angst and anguish, these tracks are of a more delicate and wholesome persuasion. For instance, Richard Thompson’s inflective oeuvre, injects such tracks as the folk induced ‘Walking The Floor With You’ and rockabillyesque ‘You Finally Said Something Good,’ with a feeling of anticipation and authenticity. And if that weren’t enough, Marc Ribot’s tightly constructed guitar solo on ‘I’m Left, You’re Right, She’s Gone,’ lends Thompson’s vocal delivery with more country zap’n’twang than Dwight Yoakam at a Stetson convention.
But if it’s something of an audacious approach you’re after, then I’d have to recommend the album’s penultimate track ‘She Thinks I Still Care,’ wherein Robert Kirby’s pastel coloured string arrangement, is indeed most inspired. So full marks to he, as well as Teddy Thompson himself who on this track, sounds as if he’s been singing country for years - which he perhaps clandestinely has!
Simply drenched in country sentiment (‘’Just because - fill in with whatever gripe seems most appropriate - she thinks I still care’’), said song, along with much of Up Front & Down Low

suggests to these ears at least, that country music could still be an important and genuine force to be reckoned with.
David Marx
http://www.davidmarx.co.uk/
www.myspace.com/davidmarx