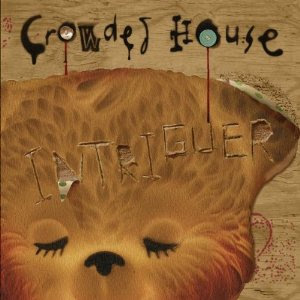 Crowded House
Intriguer
Mercury Records
Interspersed with tiny kernels of sparkling potential, Intriguer is nothing other than an album of (really) strong B-sides; which, given the majestic calibre of some of Crowded House’s previous work, is both surprising and disappointing.
Their sixth album in a career that has spanned the best part of twenty-five years - and the second since reforming, following the suicide of original drummer Paul Hester - these ten songs, although bristling with ambition, merely meander amid the slipstream of cloying comfort.
In other words, what we have here is song-writing by numbers.
All correct and relatively inventive boxes are fundamentally ticked: considered arrangements, lush harmonies, impeccable musicianship etc; but the end is result is yawningly average. There’s no real anguish, no turmoil and (perhaps a little disconcerting so far as one of this band’s major strong points is concerned) no real melody! Admittedly, the likes of the McCartney induced ’Falling Dove’ and ’Even If’ might be the exception to the rule; yet even here, said songs fall amazingly short of the mark.
No where on this album is there anything that comes remotely close to the brilliance of ’Fall At Your Feet’ or ’Four Seasons In One Day.’ And while ‘Amsterdam’ did indeed sound rather wonderful when the band recently performed it live on Radio 2, herein, it sounds horribly flat and bereft of either intensity or drama. Like much of this album, it just is, which, as hinted at the outset, for a band of Crowded House’s stature, isn’t the norm and isn’t good.
In truth, Intriguer

ought to have been terrific as it certainly has the potential. Such idiosyncratic tracks as ’Isolation’ and ’Elephants’ depict a certain urgency, sorely lacking throughout. But where the former evolves into ghastly heavy metal mush by way of an endless guitar solo, the latter is unfortunately lacking something. Perhaps gravitas. Perhaps truth.
Perhaps both.
Avid fans will probably love it.
David Marx
www.davidmarx.co.uk
www.myspace.com/davidmarx