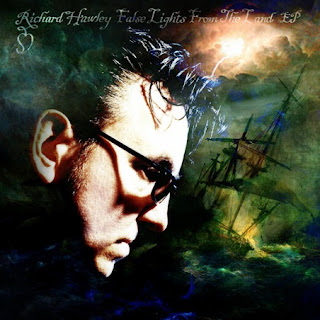 False Lights From The Land

Mute
Inspired by the sea and all things nautical, False Lights from the Land is (perhaps) something of a stopgap release by Richard Hawley that finds him casting an ever increasingly wider net unto quintessentially familiar waters. For while the Sheffieldonian may be looking to bolster his audience as a direct result of his recent BBC Radio 2 series, ‘The Ocean,’ these four-tracks, while randomly eloquent, really are nothing new.
Released on 10” Vinyl or as a Download through Mute, said EP arrives replete with all the usual Hawley hallmarks of sparkling production, wondrous song construction and shimmering guitars - but very little else.
The elongated opener ‘Remorse Code’ from his last album Truelove’s Gutter - which clocks in at just under ten minutes - is indeed a rich tapestry of textured beauty and tranquillity. All resolute and brave and reverb drenched with a plethora of tracked, Gretsch guitars, it’s a song, which bestows an entire new meaning upon the oft used, yet little understood phrase: less is more - surely another Hawley hallmark. And although reminiscent of the classic Fleetwood Mac track ‘Albatross’ (only without the melody), it’s a song that adamantly refuses to linger.
Unlike the EP’s only other original ‘There’s a Storm a Comin,’ which simply reeks with that of a melodious persuasion.
To be sure, when Hawley stumbles upon something good, one instinctively gets the feeling he knows about it. As such, this early sixties sounding, existentialist tale of romantic woe - during which the singer comes clean with: ‘’There’s a heart a breakin’/I think it’s mine’’ - convincingly steals the show.
In so doing, it takes the wind out of the sails of the remaining two covers, ‘Shallow Brown’ (a rather staid and repetitious a cappella rendition of the West Indian original) and the Hughie Jones original (yep, he of The Spinners) ‘The Ellan Vannin Tragedy.’
A pleasant nuff reminder of a talented artist, floundering betwixt albums.
David Marx
www.davidmarx.co.uk
www.myspace.com/davidmarx
Posted by David Marx at 16:39