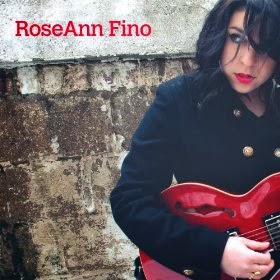 If nothing else, this debut album by RoseAnn Fino, simply sparkles with elongated, musical promise and potential. Each of its twelve tracks (the twelfth, 'Sink Your World,' being a bonus track) has that certain something, that can only be described as quintessentially alluring.

To be sure, the American songstress - from New York's Hudson Valley - has honed her craft to such an idiosyncratically attractive degree, as to be augmented by Professor Louie & The Crowmatix and occasional Van Morrison guitarist, John Platania. This can only be described as a good thing, especially on such a lush and ethereal number as the opener 'Change My Mind,' and the more than musically expectant 'Seventies Trousers' (cool title). I say musically expectant due to the song's inviting, descending chord structure.

Replete with an album cover that really does tick all the boxes; the essential one being that you're immediately drawn to it - so well done Messrs. Spinosa, Rosenbaum and Greer - some of the songs fall within the tell it as it is parameters of such soul-drenched country artists as Iris Dement and Lucinda Williams. Reason being, snatches of Fino's phrasing on 'You and I' is reminiscent of the former, while the subject matter of 'My Good Friends' evokes that of a younger version of the latter.

While Producer, Aaron L. Hurwitz, really has done an intrinsically commendable job, I'd personally recommend that many, if not most of the songs, would greatly benefit from being a lot shorter. This may partially explain why 'Little Girl Lost' and 'My Good Friends' (at 1:51 and 3:30 respectively) are the two strongest songs on the album. As a result of these two being more succinct, they're more believable.

Other than the length of the material, I also feel inclined to say that RoseAnn Fino is, at this stage at least, a better writer than she is a singer. BUT, this will probably change; especially if she continues to sit ''in the kitchen drinking boxed wine,'' and continues to listen to ''Bob Dylan singing 'I shall be free''' ('Boxed Wine').