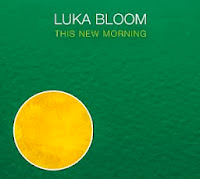 As socially idealistic and summery as this most recent release from the Irish singer/songwriter Luka Bloom is, it still resonates with a certain panache and honesty.  A facet that ought hardly be surprising, especially considering Bloom is the younger brother of Christy Moore.

To be sure, the thirteen songs on This New Morning do much to promote and pronounce something of a feelgood factor, even though the album's opener 'How Am I To Be?' can only be deduced as being a very brave track with which to open.  This is all the more substantiated by the fact that the first four lines are fundamentally sung accapella (with just a hint of background guitar):  ''How am I to be/When so much is new?/So much feels broken/And falling through.''

Having musically set the tone of the album forthwith, Bloom decides to deflect issues by another relatively proud piece, 'A Seed Was Sown.'  I use the word proud with caution here, as it all depends on where one stands in relation to the monarchy (yes, that right folks, an Irishman singing of today's Royalty!).  In the sleeve notes - before one reaches the actual lyrics - Bloom writes:  ''May 2011, for the first time in 100 years, a British monarch visited Irish soil. Queen Elizabeth stood in the Garden of Remembrance in Dublin at the side of President Mary McAleese, and bowed before a monument remembering fallen Irish heroes.''

The actual song itself might not be as melodic as the opener, but the sentiment on the second bridge in particular, more than makes up for this:  ''I've been holding on/To hurts from long ago/I've been holding on/Like its all I really know/A seed was sown.''
I'm not really sure why, but I do feel compelled to say that This New Morning really couldn't have been recorded by anyone other than an Irishman.  Apart form the accent, it's also the sentiment(s) at play, which substantiates my thinking.  And this is especially true in the case of such tracks as the oddly titled 'Heart Man' (dedicated to a friend by the name of Shane O'Neill), the ethereal 'Capture A Dream,' and perhaps one of the more powerful songs on the album, 'You Survive.'

Having been asked to ''write a song about surviving suicide,'' Bloom most certainly and defiantly delivers with the most utmost of poignant declarations.  For on the penultimate chorus of 'You Survive,' he tenderly declares: ''You survived/You survived/You're here another day/Of precious life.''
If nothing else, this is probably one of the most heartfelt albums I've heard so far this year, and as usual, I look forward to his next work(s).

www.davidmarx.co.uk
Posted by David Marx at 17:28