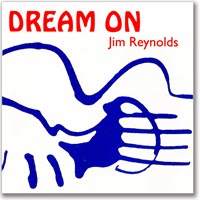 Comfortably nestled somewhere betwixt the (former) foregone conclusion of yer blues incorporated era Eric Clapton meets Andy Fairweatherlow were he to have dabbled in ragtime, Jim Reynolds is an exceedingly well versed bluesmith from Bristol.
By way of his ten fingers, he has a particular penchant for musically transporting the listener unto another place, which, although perhaps a little too derivative for its own good, most certainly makes for a mighty resfreshing change from that of the current tsunami of all too considered teenage angst.  That horribly wishy-washy genre of pained fourteen year-olds with acoustic guitars, who, by way of limp-wristed, acute irritating bollocks - for that is what it invaraibly is - profess to be in more pain than a menagerie of grief stricken, Syrian mothers.
Alas, forgive them Lord, for they not what they inexorably whine about.

So yeah, eventhough this fifteen track CD Dream On was released a number of years ago, it still shines on like a long lost diamond that's suddenly been found.
To be sure, there's a deeply entrenched honesty about the whole affair, which, apart from being highly commendable, is a commodity that is sorely missing amid so much of today's saccharine induced, sordid wank.  This is partially substantiated by the fact that five of the tracks were recorded live at the Albert Inn in Bristol, while the remainder were recorded in the studio.
In and of itself, I found this to be a rather daring, musical undertaking, even if only from that of the perspective of production.  Although to be honest, the songs are just as sonically reflective as they are complimentary with regards subject matter.  That eleven of them were written by Reynolds, makes for a refreshing change, especially given the current potential for tired stasis within the parameters of blues (as a whole).  And even if three of the album's stand-out tracks weren't written by him (Nick Drake's 'Northern Sky,' Jimmie Rodgers '99 Blues' and Chuck Berry's '30 Days'), most of the songs throughout are of an inspired, joyous persuasion.
'Feelin' Too Good Today Blues' and 'Thinking About You' are particulary strong originals; the former of which is nicely aided and abetted by way of Dave Griffiths' mandolin and Gina Griffin's violin (towards the end), while the latter leaps forth by way of a resoundingly provocative/melodic departure.  The musicality of which, I personally believe Dream On  could have done a whole lot more with.
That said, Jim Reynolds has herein delivered a fine and rather wonderful album that warrants a cascade of listens and a tumultuous round of recognition.