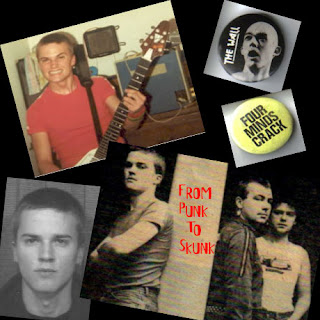 Al Gregg
From Punk To Skunk
Organic Records
From Punk To Skunk essentially traverses the several musical stages in the wide and varied career of one Al Gregg, who, with a penchant for brazen bravura and insouciant mayhem, is something of a musical matador from Basingstoke. Capice? Well other than Royal slapper Fergie, Liz Fuckin Hurley (not really her middle name) and she amid the sobriety of her own design, Tanita Tikaram, who else of notoriety hails from Basingstoke?
Along with other towns of uber-chav infestation (such as Crawley, Hastings, Swindon, Ashford and sadly, Worthing, to name but a few), Basingstoke has evolved into a possible contender for Britain's Capital of Chav. Even the name itself, reeks of quasi-drudgery; which may (or may not) account for some of this album's poetic punk incarceration.
The first five tracks are by Three Minute Warning, Gregg's first band, formed with schoolmate Laurence 'Plug' Harris. The opener 'No Rules,' along with quite possibly the strongest (original) song on the album 'Night Shift Blues,' were produced by none other than Sham axeman Dave Parsons. And it shows. On the former, Parsons contributed guitar, which, for all intent and inadvertent purposes, injects a certain fluidity into the proceedings; whilst on the latter, there's a certain contagious musical interaction between the descending chords of the verse and the cathartic onset of the chorus. To what degree Parsons was influential in this, is uncertain, but there's no denying the song's intrinsic counter melody, to that of the vocal (not to mention the ever so conclusive Beatles chord at the very end).
Furthermore, where 'Member Of Parliament' may have been influenced by The Ruts' 'Babylon's Burning' (well the bass part at least), there's no denying the fact that 'Killed In Action' was influenced by the ghastly trajectory of The Falklands War. It's simplicity suggests nothing other, while the lines: ''It's a game, a military fantasy/He's a pawn, ignored by history'' truly substantiates Thatcher's folly.
The first cover on the album arrives by way of The Wall's full-on rendition of Slade's 'When I'm Dancing,' with 'Industrial Nightmare' recalling an era indicative of social strife, so perfectly exemplified by such fab Scottish outfits as The Skids and The Scars. 'In The Night,' by Gregg's second band, Four Minds Crack, is implausibly audacious in relation to its plethora of toxic reverb - not to mention a Joe Strummeresque 'London Calling' type yelp, mid-way through.
Along with the aforementioned 'Night Shift Blues,' the other stand-out original is, surprisingly, an instrumental called 'Henhouse.' Performed by Gregg's latter day outing Psychotropes (which again, included Harris), the piece wouldn't have gone amiss were it to have been considered to underline a film score such as Chicken Run.
Around said time, Gregg also played guitar for young female upstart, Caroline Alexander. More rock than punk, Alexander may have unknowingly paved the way for the likes of Imelda May and Bat For Lashes, as can be heard on the album's second cover, an excellent rendition of Siouxsie & The Banshees 'Hong Kong Garden.' Produced by Ace of Skunk Anansie, it, along with 'Don't Need You,' ought to act as perennial reminders that spirit and substance, will by far, always outshine celebrity and crap.
Suffice/Sadly to say, those with a heart and a conscience, invariably know that this really is not the case. That said, From Punk To Skunk (intrinsically) navigates us to a place where spirit, and dare I say it, substance, reigneth supreme.
David Marx
www.davidmarx.co.uk
www.myspace.com/davidmarx
Posted by David Marx at 15:42