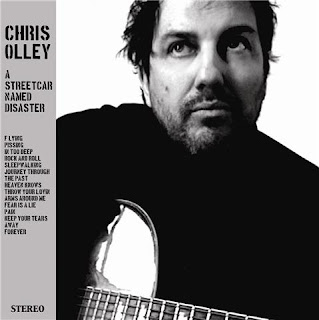 Chris Olley
A Streetcar Named Disaster
Long Distance Runner Records
Lest it be said that there are more solo albums of a pants persuasion, than there are regular albums by four regular Joes. Five regular Joes in the case of the Rolling Stones, of whom Mick Jagger (with the possible exception of current day Ringo) has released the most quintessentially vile infested and unnecessary of solo albums, ever to be unleashed upon an unsuspecting public. As a result, I’ve always been rather reticent of the term ‘solo album,’ which explains why I broached A Streetcar Named Disaster - by the former Six.By Seven frontman, Chris Olley - with perhaps a tad more scepticism, than interest and curiosity.
I really ought not to have concerned myself.
For unlike Jagger, Olley has chosen a solo strategy of melody and melodrama, mayhem and a nod towards meliorism - which in this day and saturated age of warbling bimbettes with nigh nothing on and nothing to say, is refreshing to say the least. Opening with what sounds like a possible declaration of love, the acoustically eloquent ‘Flying’ immediately draws the listener in - as if by chance. As if it were simply meant to be. And when very early on in the song, Olley reveals that he ‘’would go anywhere to find you,’’ surely only a dour cynic of contrite design would deny him.
The oddly titled ‘Pissing’ isn’t exactly ‘Territorial Pissings’ in relation to power’n’poise, although it’s porcelain lightness of touch and musically jocular pronouncement, is reminiscent of The Beatles ‘Two Of Us’ circa Let It Be. It would I believe, have made a far stronger single than ‘In Too Deep,’ which is sounds like early Stone Roses sans the swagger’n’lager. The same might be applied to the equally strong ‘Sleepwalking,’ in which the music-box effect just before the three-minute mark, is nothing other than a delicately considered stroke of magic; especially when Olley sings: ‘’All around are distant trees/I cry out loud as they come after me/I see you there how you used to be/I had you back then lost you all over again.’’
There’s a Neil Young quality to ‘Journey Through The Past,’ especially where the chorus is repeated amid the fade, while the album’s dark and perhaps most inventive track ‘Keep Your Tears Away,’ provides the sort of catharsis so indicative of the singer’s former compadres. That it includes banjo and mandolin amid its angular production, only strives to estrange the protagonist to whom Olley is addressing, even further, especially when he sings: ‘’I put my life on hold I wasted so many fucking years/I should never have strayed/Never departed from all of my illusions.’’
All petulant angst and mighty kaleidoscopic guitarchitecture, Nottigham’s finest Six.By Seven, may have imploded last year - leaving behind them a veritable wake of several idiosyncratic and important albums, of which The Way I Feel Today is still something of a force to be reckoned with – but this solo effort really is quite something. Written and recorded over a six-month period in Chris Olley’s living room/cellar, A Streetcar Named disaster

is an ascetic and audacious solo album that needs to be heard. Wherein the sleeve notes, the author writes: ‘‘any absence of a snare drum on this album is entirely intentional,’’ makes these thirteen tracks ever more ample and alluring.
David Marx
www.davidmarx.co.uk
www.myspace.com/davidmarx
Posted by David Marx at 15:38