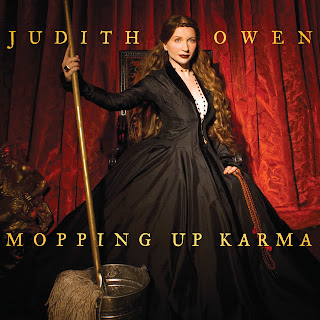 Judith Owen
Mopping Up Karma
Courgette Records
I first discovered Judith Owen when I saw her play with Richard Thompson at the Brighton Dome last year, and pretty fantastic she was too. Along with a coquettish broadside - which more than complimented the masculinity of Thompson’s stern and humorous English persuasion - Owen’s musical dexterity and ease with which she performed, ensured the performance was definitely one of those to remember.
As such, her album Mopping Up Karma

is something of a cunning surprise.
Other than her Englishness (on the back cover, the songstress is seated next to a rather large cushion adorned by a union jack), many might consider there to be very little correlation between Richard Thompson and these thirteen tempestuous tracks. But upon hearing the eccentricity of the songs, as well as the musicianship and essential subject matter – relationships, relationships and more relationships - one can see why the landmark guitarist recruited Judith Owen into his three-piece, live ensemble. For he too, writes and sings of a similar inducement within parameters not that far removed from those on display here.
Opening with ‘Creatures of Habit’ and ‘Let’s Hear It For Love,’ it’s clear from the outset that the music contained herein is very grown up, very lavishly produced (by Glen Ballard) and very ‘English.’ English in a quintessentially bonkers Kate Bush kind of way - of whom anyone in their right mind ought to be (and probably is) a huge fan.
That Owen sings in an overtly refined, English accent, goes some way in substantiating her organic and somewhat pleasing musicality - of which assorted listeners will surely be either entranced or encouraged by. Personally, I like the way she has declined to sing that limp-wristed, mid-Atlantic wank-twang.
By the time we reach the nigh sexual psychosis of ‘Ruby Lips,’ it’s overtly evident, we are listening to a voice that’s as forthright, as it is audacious, as it is disturbing: ‘’Somehow, somewhere, there is a bastard waiting for me here/He will hurt me like I’m hurting you now/And I will adore him.’’
Fucking wild’n’wacky or what? Alfred Hitchcock would have a field day… The same could be said of the Waits tinged ‘Get Into It,’ on the outro of which, the singer implores the listener to: ‘’empty your life.’’
‘Shine’ meanwhile, reeks of silent confidence as Owen’s voice invariably soars beyond the realm(s) of her salient theatricality, whilst the layered production of ‘Inside You,’ is reminiscent of 10cc circa ‘I’m Not In Love.’ The prime difference being the gargantuan cleavage betwixt potential normality and protectorate insanity: ‘’I could be so influential/A tyrant in my mother’s womb.’’
And so it continues, until one reaches the ideological catharsis of the album, ‘Who’s That Girl.’ Played with all the eloquence that such a title deserves, it’s a song in which the forbidden fruits of temptation evolve into being the prime protagonist from which Owen (‘’a racehorse running with blinkers’’) so desperately seeks to be relinquished.
Mopping Up Karma is an album wrought with inspired songs, exquisite production and colourful, if not kooky, karma.
David Marx
http://www.davidmarx.co.uk/
www.myspace.com/davidmarx