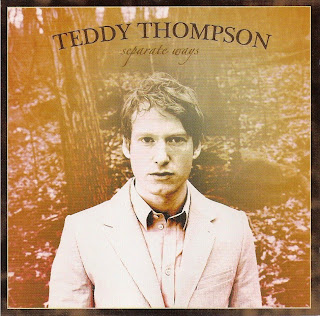 is an album of profound simmering beauty, which on occasion, is a true reminder of how songs really ought to be written and produced. The pathos of (some of) the lyrics is heartfelt and humbling, the strength in melody is both elementary and eloquent, while the soaring musicianship is as equally idiosyncratic as it is inspiring.
That Teddy Thompson is the son of Richard and Linda Thompson - the former of whom appears on five of these twelve tracks – it’s no surprise that the sheer level of musicianship is unequivocal and unsurprisingly discerning.
Martha and Rufus Wainwright sing lush backing vocals on the album’s reflective opening track ‘Shine So Bright,’ wherein Thompson immediately reveals: ‘’I wanna be death bed thin/Never realize the state I’m in’ and ‘Everybody Move It’ - a song which sounds as if it could have been an out-take from his last album A Piece of What You Need.
The aforementioned lyrics of a humbling persuasion leap forth on ‘I Wish It Was Over’ and the album’s title track ‘Separate Ways.’ The first of which is musically speaking, adroitly clinched as a direct result of Richard Thompson’s deft guitar work, with the latter reminding these ears of ‘Four Seasons In One Day’ by Crowded House.
In other words, the title track is quite possibly the album’s stand out track.
Delicately performed, not to mention sung with a yearning lucidity, Thompson comes clean throughout, especially when he sings: I’m turning into me, not you/I can change my mind not my blood/And not all who love are blind/Some of us are just too kind/We forgive too much/And never speak our minds.’’ And when Julia Kent’s nigh wondrous cello makes its eventual entrance (about two thirds of the way through), a whole new meaning is lent to the ethereal wor(l)d of grace.
Lavishly produced by Teddy Thompson and bassist Brad Albetta, other stand out tracks include the rocking, stomping ‘That’s Enough Out Of You,’ and the utterly susceptible ‘No Way To Be’ - both of which include Richard Thompson on guitar, as well as his compadre in Fairport Convention, Dave Mattacks on drums. Once again, the majesty of the playing is simply breath taking, especially on ‘No Way To Be,’ which includes none other than Garth Hudson on organ and synthesiser. The Garth Hudson - as in Bob Dylan, ‘Tears of Rage,’ Robbie Robertson, ‘The Weight,’ ‘The Night They Drove Old Dixie Down,’ the band whose album Music From Big Pink literally changed Eric Clapton’s life forever…
Cracking.
David Marx
http://www.davidmarx.co.uk/
www.myspace.com/davidmarx