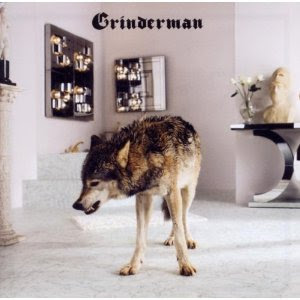 As one may recall, the original Grinderman manifesto was: ‘’no God, no love and no piano,’ which, depending on one’s own schismatic shaboogie, the blues/punk infused foursome fully adhered to on their debut.

But Grinderman 2 is a different animal altogether - with the emphasis on animal.

There may well be something of the continued deconstruction of Cave’s masculinity throughout, although his ravenous, lizard-brain persona is herein, far more agonistic. For instance, the gnawing guitars and persistent bass drum’n’tambourine on current single ‘Heathen Child,’ are expressively beast-driven, not to mention a little sympathetic to that of a Lennonesque inflection; especially when the lyrically ebullient Cave sings: ‘’I don’t care about Buddha/Care about Krishna/Don’t care about Allah.’’ Admittedly, some may consider the song’s construction as a simple re-working of ‘No Pussy Blues,’ but once one has taken the head-rush of imagery on board, this comparison with the latter’s tongue-in-cheek sensibility will probably fall by the wayside.

That said, it’s the musical foreboding of the album’s two opening cuts ‘Mickey Mouse and The Goodbye Man’ and ‘Worm Tamer’ that truly invigorate.

The fairytale perversion of the former, finds Cave and his three bad Seeds as bad as bad can be - wherein idiosyncratic intelligence looms and smacks its way out of any pre-ordained (trusted) parameters. Ace intermittent drums amid an equally ace, inexorable bass-riff, reveal the true grit of Grinderman’s propensity for full-throttle mayhem in the extreme. And what a fucking great, perpendicular porn like noise it is too. One can’t help but feel swept up within it’s contagious and nigh hypnotic current; for such is the velocity of the song’s initiation and invitation. Likewise, the grinding Perspex emancipation of ‘Worm Tamer,’ itself a wizened whirlpool of extraordinary sound - within which Cave magnificently reveals: ‘’My baby calls me the Loch Ness Monster/Two great humps and then I’m gone.’’

However, if it’s a great couplet you’re after, you won’t find anything more immediately enticing than: ‘’The spinal column of JFK/Wrapped in Marilyn Monroe’s negligee’’ on one of the album’s strongest pieces of work, ‘Palaces Of Montezuma.’ A tad reminiscent of The Rolling Stones’ ‘Sympathy For The Devil’ (which ain’t necessarily a bad thing) said song is thus annoyingly hummable and simply littered with such great lines as: ‘The custard coloured super dream of Ali McGraw and Steve McQueen.’’

The lyrical flip side of the above is the sparse and sinister ‘When My Baby Comes,’ in which it sounds as if Cave sings from the standpoint of a rape victim. Just like the quietest song on the band’s debut album ‘Man In The Moon,’ this too is the most severe (in terms of sexual/social analysis and provocation). It succinctly states its case before moving on.

While ‘Evil’ is akin to intelligent Motorhead and ‘Kitchenette’ is psychedelically reminiscent of nineties New Jersey outfit The Iconoplastics, the album’s closing track ‘Bellringer Blues,’ is, like many of the singer’s closing tracks, an exercise in Cave by numbers.

Other than that, Grinderman 2