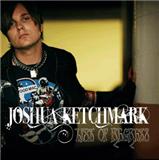 Joshua Ketchmark
List Of Regrets
Self Release
This eleven-track album by Joshua Ketchmark, is a full on, roller-coaster ride through the back pages of downtown potential and West Coast Americana. In other words, List Of Regrets is a high-octane, smorgasbord cross betwixt mid-nineties Matthew Sweet (circa Girlfriend) Ryan Adams (circa 29) and the mighty under-rated Dramarama (circa Hi-Fi Sci-Fi).

So, lots to ponder and riddle upon.

The slow build of the blues based opening track ‘How 2 Let Go’ (replete with Prince spelling), compellingly sets the stage for what’s in store. Its kloof like musicality, wholeheartedly lending itself to the rather lyrically pensive follow-up, ‘Never Beautiful.’ A song that’s as equally introspective as it idiosyncratic, one would indeed be wise to traipse with considered caution, especially when Ketchmark sings: ‘’I can see you scatter/Breathing misconception/Into all of your answers.’’

Gadamer with a guitar (German philosopher, who, by way of Truth and Method, tried to clarify the phenomenon of understanding)? Or, inadvertent sage with a mighty list of pronouncements to make, by way of rock’n’roll?

Either way, what we have here and throughout the album as a whole, is a compelling assortment of niftily crafted toones; replete with well-constructed words and measured production by Ketchmark himself. Prime examples being the backwards Beatlesesque guitar on ‘On Your Shoulder’ and the distorted avalanche of guitars (care of Greg Ripes) throughout the alluringly titled ‘Maybe.’

To be sure, when the singer/songwriter moves away from the more obviously clinical rock stuff, the embryonic intensity of drama in such a song as ‘It Doesn’t Mean The Same’ is invariably allowed to breath and shine. A line such as ‘Spanning time between cigarettes and rosaries/And claiming that it’s/The only way,’’ might, in some quarters, be considered as good as it gets. But, because it’s partially and unfortunately smothered with superfluous clutter, it doesn’t quite hit the mark. This is a shame really, because as mentioned at the outset, List Of Regrets has oodles of potential.

The sort of which, warrants both recognition and respect.